In June 2017, I lost my engagement ring (similar to the one in the pic attached) in at a friend’s wedding when I had taken it off and put it in my clutch bag to put hand cream on in the car and somewhere along the way it had fallen out somewhere between the pitch black carpark to the wedding hall (at Shangri la Gardens in Wynnum West). I had only told a few closer friends about how I was looking for my ring cause I didn’t want to draw attention to myself as it would take away from my friend’s big day, so discreetly, my friends and I were all looking everywhere for it before and after dinner and I had even told the staff there to keep a lookout for us. All my friends were praying and I did say a very quick prayer – with the very little faith that I had at that time – to call back the ring in Jesus’ name! (it’s a very expensive ring and I was thinking it would be a miracle if it came back cause someone could just pawn it or whatever if it was picked up by a stranger). I also remembered other friends like Michael & Cammy from church who had a similar situation happen and miraculously the diamond was found. When we got home my husband said we should lodge the insurance claim and I said “so fast?! let’s just wait a few days at least in case it shows up.”

The very next day, we went to church and we were just praising & worshipping God in service, but we still had no idea where the ring was, we were going to go back to Shangrila in the afternoon to have another look. Straight after service finished Vann (one of the tech team guys who I’m not really that close to & didn’t tell him about my situation with the ring) came to find us and he asked me if I had lost a ring… I was just in utter shock because he puled my engagement ring from his pocket and said he found it last night. He was so relieved that it was returned to its rightful owner. Later on, we found out his side of the story and that the night before he was at the same wedding and he parked his car several cars away from us… he saw something on the floor near his car and picked up but he didn’t know whose it belonged to.

No one had told Vann that I had lost my ring (there were over 100 guest at the wedding) so how did he know? It was only during service that Vann said he had an impression that it was my ring and God told him “it belongs to Jazi return it to her” that he came and found me. My husband was speechless and I was just crying in astonishment about how God can speak to directly to someone and also how much he cares and loves us to even return something that so meaningful to us (even though he didn’t have to… cause in light of the eternity a ring is just something temporal).

We praise God for how awesome He is and it’s a story and testimony I will remember every time I look at my ring now! We hope that this will inspire you to have the faith to call back things that are rightfully yours in Jesus’ name, to put your trust in a God that loves and cares for you deeply and to keep sharing the wonderful and miraculous things He does in your lives! xoxo, Chris & Jazi. 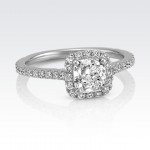